But now the facade has been be fabricated, transported and mounted, and it is time to judge the final results.

Let us start with the construction phase. I am not found of surprises and that is why I detailed the facade down to the nuts and bolts. I was concerned that the manufacturer was not able to deliver good solution for important detail/concepts and therefor I wanted to be proactive. The result was that there were no bad surprises making the modules or when mounting them to the building.

And frankly, I am quite happy with the facade. I like how the facade reflects the light on the aluminium cladding, and the champagne color is playing well with the surrounding buildings. And keep in mind it is not an expensive facade, but together with the manufacturer we have found good solutions that we have discussed thoroughly. 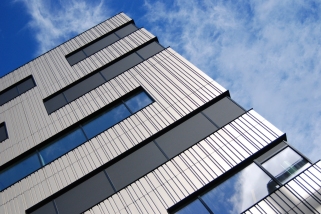 I have been working at Dark Architects since 2006, but I felt it now was time to experience other types of projects and opportunities. I therefore decided  to start my own office called Hel Ved Arkitektur AS.

«Hel Ved» litterally means solid wood, but it is also an expression that has a deeper understanding. In Norway we use the expression for describing something, or someone, that is «rock solid» and «genuine».
These values are values I wish my company will be associated with, both regarding architecture and management.

I notice that I encounters different challenges now that I am a small company regarding technology and digital design compared to my previous workplace. I am looking forward to post these experience on this blog.

I have just returned from an excellent trip to Shanghai where I attended my first Autodesk Revit Gunslinger event.  We were in total 16 Revit enthusiasts from around the world and we tested new Revit features for four days. The event was superbly organized by the Autodesk team and we had a great time! 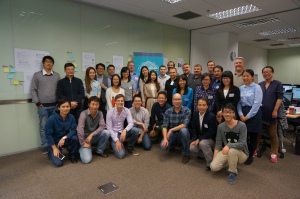 The Gunslingers and the Autodesk team

Last year I attended Revit Technology Conference (RTC) in Delft and I had a great experience. It was a compact and small conference, high quality lectures, and it was well organized even thought it was the first time they arranged a RTC in Europa. The same qualities seemed RTC in Dublin to share. The lectures I had signed up for looked promising, the city seemed to have a lot of atmosphere, and they had increased the length of the conference with one day. So this time I had high expectations, and from my office, Dark Architects, we sent 7 architects in total to this conference. That is 13% of the entire office, so I really hoped that they would not be disappointed. 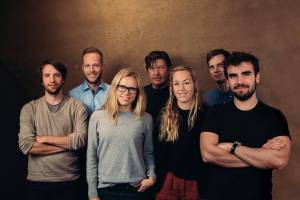 As usually the conference started with Chairman’s Introduction & Keynote Presentation and it was a great start. Especially when Paul Doherty from «the digital group» took the stage, and talked about how the digital technology would change the world in the future. He explained the value of making big data understandable and available in a live context. He used examples on how firemen could use BIM technology together with other information that was available in the area, showed us a new Google project called Flux.io, and he showed us how they are testing robots in the states to do surveillance in kinder garden. One of many tasks the robot is going to perform is to report if a child is going towards a car that is suspicions based on face recognition and by scanning number plates. In fact, his vision of the future made me nervous and uncomfortable regarding the many issues regarding surveillance and privacy. And then, his last example was how Watch_Dog We are big data collect and visualize the absurd amount of information that is already open and available on the web. 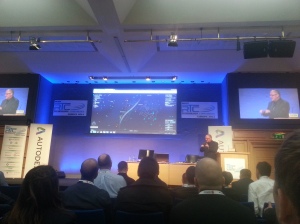 Paul Doherty from «the digital group»

Wow, is this how we want to use technology in the future? Is suddenly the movie «Transcendence» I saw on the plane to Dublin not that far off after all? One of the best speakers last year at RTC in Delft was Kelly Cone where he explained how Beck Group used 3D scanning in a project. This time he titled his lecture “Drawings? We don’t need No Stinkin’ Drawings” and he explained actually how much it costs in time to produce and maintain a drawing. In a recent project the Beck group tried to reduce the number of drawings to a minimum. They started listing 169 sheets of drawings they normally would produce, but by asking the consultants what they actually needed of information; they reduced it with 98 sheets. That is a lot of money saved.  He then continued talking about model based fabrication and briefly talked about how this would impact the industries. Next speaker was Julien Benoit with “You can count me like one, two, three, I’ll be there”. The best part was his explanation of the power of using parts when making schedules and how he used Dynamo to import and export information to building elements in the model. That we all like it sexy was how Jay Zallan approached the importance of making a well modeled BIM model. And from there Anthony Hauck from Autodesk took the stage and talked about the visions Autodesk have for Revit and other application. He made it clear that Revit should be seen as a client that not will do everything, but rather be seen as one of many tools in the ecosystem. He also demonstrated a couple of cool new application like A360 and project Akaba. I am looking forward to testing out these tools soon.

After wrapping up the day with Glorious Gadgets, where they showed new gadgets and technology, first day of RTC officially over. The second day started with Brian Mackey talk about “Every day use of adaptive components”. It’s was a good introduction with some basic tips of how to use it in a regular project, and a good reminder of how useful adaptive components really can be. In these technology conferences it can be almost to much attention to drawingtools and skills, and therefore I really enjoyed the next lecture «The good, bad, and ugly of sharing a design model with the contractor» by Michael Whaley and Josh Lowe. They discussed how the contractors should use the models during the construction phase of a project, and the pros and cons for the different delivery methods they use in the US. And now I want to talk about Dynamo. Håvard Vasshaug started in many ways a RTC marathon of Dynamo sessions this year. And what a great start! My colleague did a live demo, where he builds his formulas and nodes from scratch. It was impressive how much he had time to do in his limited time, but that Dynamo did not crash during his hole session was maybe even more extraordinary:)

Andreas Dieckmann, Julien Benoit and Peter Kompolschek did continue with Dynamo labs and sessions through the entire Saturday and they did demonstrate how powerful Dynamo can be in the daily use of Revit. Maybe the most important thing I learned in these sessions is that Dynamo can make my life much easier also with simple tasks. I am thinking about tasks like importing/exporting data to and from an object in Revit, or to extract buildinginformation for object to be placed on sheets etc. You should remember that Dynamo do so much more that only creating complex geometry. 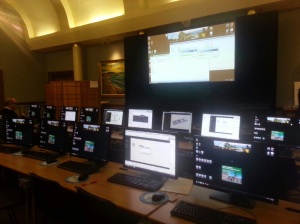 The RTC committee has arranged another great conference. It was both inspiring and fun, professional and social. The third RTC in Europa will be in Budapest next year, and then I hope to see even more European speakers. I think that would increase the popularity in general and make RTC EUR stand out from the rest of RTC.

I recently spoke at the «Cad-Q days» conference in Stockholm. I shared my vision of how digital tools are changing the daily work of an architect. I see a great potential to make great architecture by embracing new tools, and by understanding the borders between different disciplines are blurring out.

DNB’s new headquarter consist of three buildings with a underground story that connects the buildings together. The building to the far west is designed by Dark Architects, and since the shape of the building i like a stair, it is not a strait forward answer how to make the internal flow efficient with minimum amount of cores. There is also a public roof and a restaurant on the top of the building, so in addition to find the best solution for the many employees in the building, we also had to work out how we could bring the many guests to the spectacular view from the public roof.

The solution was an inclined public elevator that is more than 110 meters long that only stops at ground floor and the top floor, and along the elevator shaft there is a strait stair that connects all the floors in the building.   This stair has many names such as «Stairways to heaven» and recently there has been a competition who can be the fastest up all the 303 treads (http://www.dn.no/dnaktiv/2014/05/09/Lping/303-trappetrinn-p-54-sekunder).

The design process was a joyful ride. When a horizontal slab meets an inclined slab, there will always be some interesting discussion. In addition will the angel of the inclined elevator have direct impact on how the stair will be, since everything is dependent on each other. To feed the project with valuable drawings, I had great success to combine regular floor plans / sections together with isometrics 3D views. 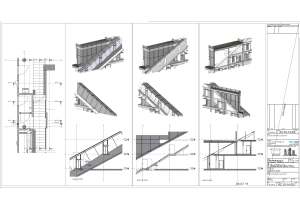 In this project we started using ebeam, and we found it very useful in many meetings and discussions. Suddenly everybody could draw something that everybody could see and participate in.

A photo from the construction phase: 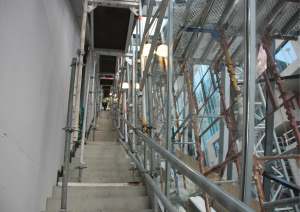 And this is the final results:

Please read more about the project:

DNB’s new headquarter consist of three buildings with a underground story that connects the buildings together. The building to the far west is designed by Dark Architects, and the concept for the facade was to give it a heavy and solid expression. We did this by playing with different depths and by using a black granite as the facade material. 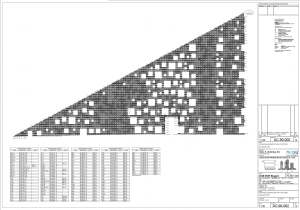 To stack all the different cassettes the way we wanted, we tagged all the cassettes on the production drawing. Since they were going to start mounting from the left of the building, we also added which container every cassette should be shipped in. This to make it more efficient on the construction site.

Every cassettes is drawn in 3D so we were in total control of the details.

Read more about the project: